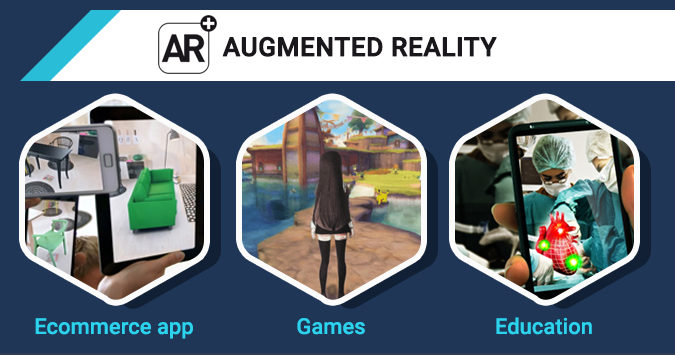 Augmented reality is a technology that integrates digital information and the user’s environment. In contrast to the virtual reality that is based on the artificial environment, the augmentation is typically based on semantic context and works in real time with environmental elements. Further, it helps to turn an individual´s perceived world into real world, with the elements of the digital technology.

Augmented Reality 3D viewers such as Augment help the users to set full-size 3D models in the real environment, either with or without using trackers, which are uncomplicated images attached to 3D models to obtain Augmented Reality.

DEVICES OF AUGMENTED REALITY:
Augmented Reality is availed on any types of screens & connected devices:

In mobile devices such as smartphones, tablets, etc, Augmented Reality works like a magic window; the viewer on the devices helps to view holograms and to operate on the 3D models. Today, you can find a plethora of Augmented Reality apps available for Android, iPhone and iPad.

On the connected television players and on PC, a webcam helps to access Augmented Reality; while it is relayed through the screen. It can be problematic, if you manipulate a tracker, before your screen.

SOFTWARE AND ALGORITHMS:
The software should obtain real world components from the camera images. This process is known as image registration. This process indulges multiple computer vision methods, which are connected to the video tracking. Various augmented reality computer vision technologies are obtained from visual odometry. Generally, they have 2 different parts.

Augmented Reality Markup Language (ARML) is developed in the Open Geospatial Consortium (OGC),that includes an XML grammar, which explains the appearance and position of virtual objects within the scene and ECMAScript bindings to permit active access to virtual objects properties.