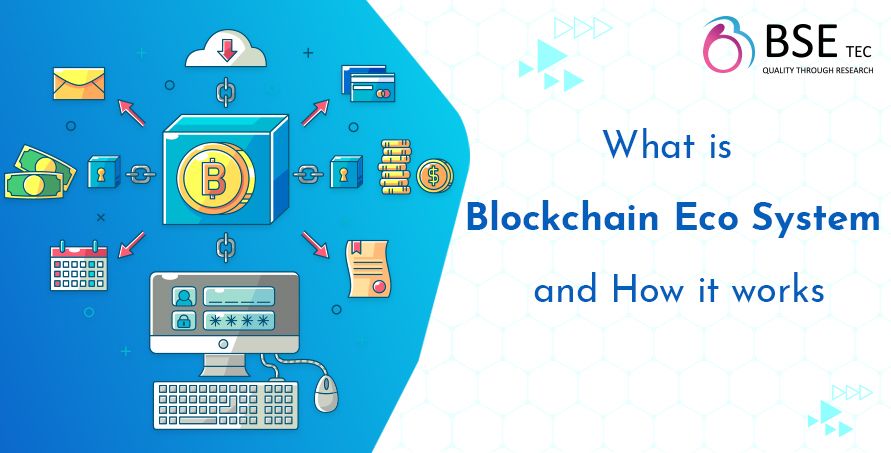 Blockchain Ecosystem in simple words is an amalgamation of all the units that are involved in the blockchain technology. Internet is the primary source and other entities including users, investors, developers and miners.

The Blockchain Ecosystem can be classified under three main domains:

By physical nature, a blockchain consists of various nodes or computers and smart devices that have the power to approve or disapprove any transaction that takes place in the real-time.

Creating a node is simple and an egalitarian process but it is mandatory to have a great amount of storage capacity. Each node is identified by an IP address which cannot be accessed by hackers. More the number of nodes higher the safety, this is because each node has to approve upon any transaction and thereby the chances of forging or hacking is highly impossible. It also lowers the risk of server problem or error.

Although the internet is essential as it permits all the nodes to connect, it only acts as an external supporter and is not connected to the blockchain directly.

Blockchain technology also requires a lot of workforces to handle various operations especially at the internal level. Three types of people who are involved in this area are developers, miners and investors. Developers work in the Research, development while the miners fix the issues that arise. The investors are the clients who wish to empower their business with blockchain technology. These three important role players are part of the ecosystem and contribute in different ways.

In terms of software, blockchain technology needs coding which can be done in any high-level language such as C++, JAVA, Python etc., Blockchain must be created in such a way that it is language-friendly and can be used for any business module. DApps are also a part of this system wherein many use cases have been generated through extensive development of applications for various sectors. The software ecosystem is one of the ecosystems that keep evolving over time and gets better. A blockchain development company like BSEtec works to give full-fledged support and blockchain development services.