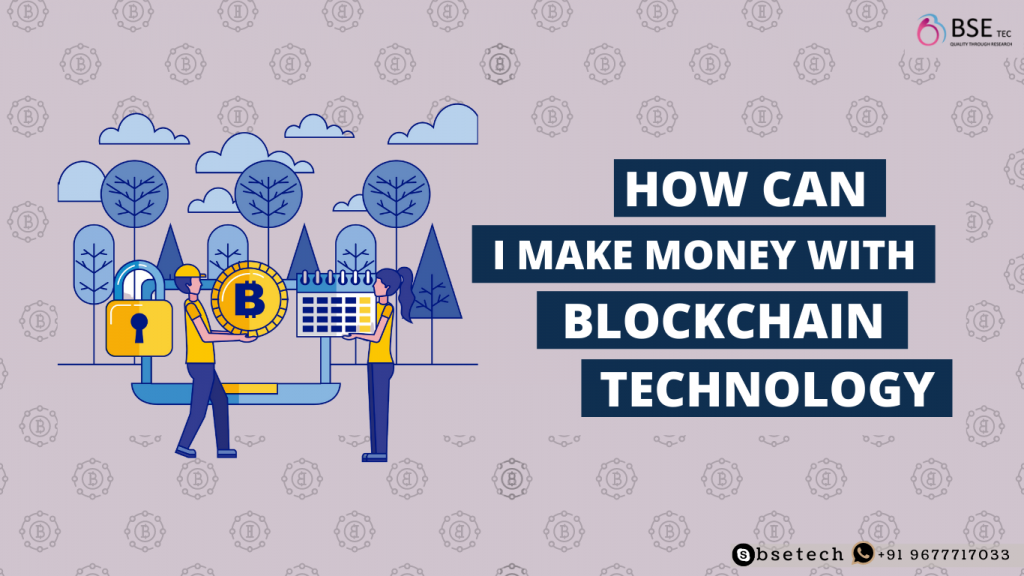 If you’re a software developer, for example, you could build a blockchain app—a system of smart contracts that would run on top of an established blockchain such as Ethereum. You could also build an application that runs atop your own custom-built blockchain.

Read Blockchain technology to be adopted in 2022

Building your own cryptocurrency is another option. While certainly not as widely adopted, there are some advantages to creating your own coin over trying to find customers for a yet-to-be-defined product or service:

You don’t need anyone’s permission (other than perhaps some regulatory bodies), so there are fewer barriers to entry in terms of launching your currency.

Once launched, your coin will have use cases immediately as well as speculative value if you’ve done enough marketing and have convinced people it’s worth something.

Mining is the process of solving complex math problems, which computers do by competing against each other. In order to mine, you need powerful hardware connected to lots of electricity. Mining is not very profitable unless you invest in lots of expensive equipment like ASICs (application-specific integrated circuits). But as competition in mining cryptocurrency grows, it becomes harder and harder for miners to solve these complex problems. As difficulty increases, miners must convince more miners with faster equipment to join their pool. Miners who don’t have access to fast hardware can still make money by joining a mining pool and combining resources with other miners, but they will only receive a fraction of rewards proportional to how much computing power they contribute.

Simply put, blockchain technology is becoming much more prevalent in the everyday business world. As such, it may be beneficial for investors to consider adding some blockchain stocks to their portfolios.

When it comes to investing in blockchain stocks, here are some of the companies that you might want to consider: Accenture PLC (ACN), DocuSign Inc. (DOCU), PayPal (PYPL), and Nvidia Corp. (NVDA). These companies have all been doing very well lately, and have seen significant increases in stock price over the past several years. The best part about these stocks is that they are not as volatile as cryptocurrencies can tend to be. Plus, there’s a lot less risk involved when deciding to invest in blockchain stocks than trying your hand at trading cryptocurrencies directly.

Also check How is blockchain technology changing business and the internet?

You can still make money investing in ICOs, but you’ll have to be more careful and do much more research beforehand.

Evaluating the value of an ICO.

If you’re investing in an ICO, you’re basically investing in the people behind it. Does this team have a track record of succeeding? Do they have experience in their field or are they just talking heads? If it’s a company that already exists, do they have a solid business model and customer base already? For example, if an online retailer is launching its own coin for use on its site, does it already have eCommerce experience? Or is this its first time doing anything like this? The more experience a team has before the ICO launch and the stronger that record is, the lower your risk will be.4 Innovative uses of Blockchain role in SOCIAL IMPACT initiatives

Choosing the right ICO to invest in.

It’s important to remember that even with all due diligence in evaluating an ICO’s value, there are still no guarantees. You might invest your hard-earned money into what seems like a promising project only to watch it fail miserably after launch.

To help minimize these risks as much as possible, here are some factors worth considering when choosing which ICOs you want to put your money into:

Project stage – Is this project far along enough that there’s something tangible beyond just the idea stage or is it all hypothetical at this point? If there’s something behind the scenes that you can actually see and interact with (like a website or app), then chances are their product has gone through some early development stages and testing before launching publicly – thus reducing your risk of total failure because those kinks will hopefully already be worked out by launch day.

Team size – While one person may have started an idea for new token technology with great intentions of success someday down the road; if she doesn’t know how to run a successful company yet or hire top talent then chances are not so good either way since no amount could really fix things once they’ve gone.

The most obvious way to make money with blockchain technology is to start a blockchain-related business. This could be a startup, a non-profit organization, or even just an innovative idea that you think might help transform the world.

Starting a new business can seem intimidating, but here are some tips:

Find your niche! What do you think others are going to need? Is there an issue out there that no one else is trying to solve? Maybe other people haven’t thought of it yet, but you have—this makes you special and could lead to an extremely successful venture.What are security tokens in blockchain technology and how are they linked to start-ups?

Look at your finances. Do you have enough capital to launch this innovative idea? If not, find investors who will back your project!

The best thing about blockchain technology is that it is being used for more than just cryptocurrency. There are many uses for technology, including financial services and healthcare.

Blockchain is a technology that is going to be used in a lot of different industries, and knowing how to use it will help you make more money. Contact BSEtec for more information about blockchain  and cryptocurrencies.